We are the leading German manufacturer of plastic bags made of recycled plastics and virgin granules in Germany. For more than 30 years we have been providing our experience and knowledge to our customers. In January 2014, we moved our headquarters from Sinsheim-Dühren to Siegelsbach, about 20 kilometers away, near Heilbronn. On our premises, which now cover almost 100,000 sqm, we recycle film waste into high-quality plastic pellets using our state-of-the-art machinery, which we then feed into our film production.

We produce plastic products such as

The production of your films for your plastic products for waste disposal is in good hands with us. Custom-made packaging bags is our business.

1987 – Acquisition of the first converting machine

2013 – Complete relocation of operations to Siegelsbach

SIEGELSBACH: CENTRAL LOCATION – AND YET IN THE COUNTRYSIDE
The idyllic village of Siegelsbach is located just 7 km from the A6 motorway (Bad Rappenau exit). At the beginning of 2011, we first became aware of it through the daily newspaper, as the former Bundeswehr barracks were to be closed here. Already after the first visit the spark jumped over. The prospect of soon being able to call almost 100,000 square meters of factory premises our own did not deter us from the high bureaucratic hurdles that the conversion of the barracks area into an industrial area entailed.

GOODBYE SINSHEIM – GOODBYE SIEGELSBACH, HERE WE COME
Now we were faced with the challenge of organizing a company relocation without production and thus our customers suffering. It quickly became clear to us that this could only be done department by department. Numerous trucks had to roll, special cranes were needed to move the heavy machinery, and during the move, production took place partly at the old site in Sinsheim, but partly already at the new site in Siegelsbach – this also had to be coordinated. At times, our nerves were on edge, but the prospect that everything would soon be running smoothly again gave us wings.

THE EFFORT WAS WORTH IT
After we were able to start up our recycling plant with state-of-the-art washing technology in October 2013 with the completion of our recycling hall, the first film blowing extruders were already started up in Siegelsbach in January 2014. At the end of June 2014, the time had come: Sinsheim was closed and the future now belongs to Siegelsbach.

UNIQUE ADVANTAGES
Spacious and bright storage areas allow us to stock up on standard items, store special items and make just-in-time deliveries. In Siegelsbach, we have finally been able to realize our vision of a closed loop as a contribution to sustainable and resource-saving production. There is now sufficient space for further future projects. 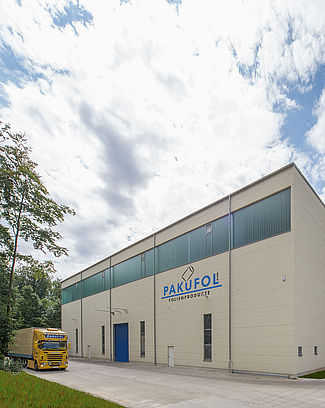